At the close of the Constitutional Convention of 1787, “A lady asked Dr. Franklin ‘Well Doctor what have we got a republic or a monarchy?’ A republic replied the Doctor if you can keep it.” 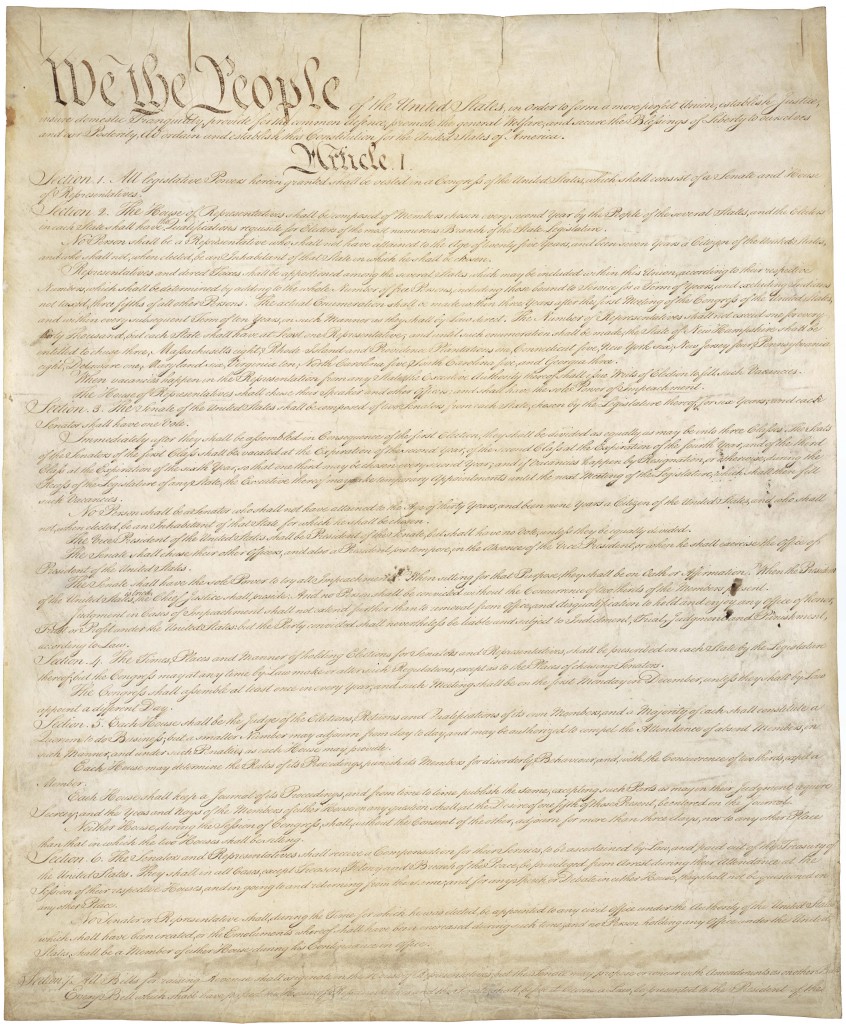 The Constitution of the United States contains a preamble and seven articles that describe the way the government is structured and how it operates. The first three articles establish the three branches of government and their powers: Legislative (Congress), Executive (office of the President,) and Judicial (Federal court system). A system of checks and balances prevents any one of these separate powers from becoming dominant. Articles four through seven describe the relationship of the states to the Federal Government, establish the Constitution as the supreme law of the land, and define the amendment and ratification processes.

The Constitution of the United States: A Transcription

What kind of government does the U.S. have?

The Preamble
We the People of the United States, in Order to form a more perfect Union, establish Justice, insure domestic Tranquility, provide for the common defense, promote the general Welfare, and secure the Blessings of Liberty to ourselves and our Posterity, do ordain and establish this Constitution for the United States of America.

Video read along with the Constitution’s Preamble:

Students Reflect on Promises of the Preamble:

Bill of Rights: Hear and Read the 1st 10 Amendments:

Ducksters (for younger students): The Bill of Rights for Kids

Drafting the Constitution and the Constitutional Convention
Just a few years after the Revolutionary War, James Madison, Alexander Hamilton, and George Washington feared their young country was on the brink of collapse. America’s first constitution, the Articles of Confederation, gave the Confederation Congress the power to make rules and request funds from the states, but it had no enforcement powers, couldn’t regulate commerce, or print money. The states’ disputes over territory, war pensions, taxation, and trade threatened to tear the young country apart. Alexander Hamilton helped convince Congress to organize a Grand Convention of state delegates to work on revising the Articles of Confederation.

The Constitutional Convention assembled in Philadelphia in May of 1787. The delegates shuttered the windows of the State House and swore secrecy so they could speak freely. Although they had gathered to revise the Articles of Confederation, by mid-June they had decided to completely redesign the government. There was little agreement about what form it would take.

Articles of the Constitution 1-7:

Principles of the Constitution

Bonus: Send Us Your Essay!
Write an essay on “What The U.S. Constitution Means To Me,” and we’ll post it in the Multipurpose to share with others. Younger students can write a paragraph and draw a picture representing America. Send your essays in PDF or PNG format to: info@discoveryk12.com

Visit the Bill of Rights page!