– 15 Fun Facts About the Skeletal System

Your skeletal system is to your body what wood and bricks are to a house. With a strong foundation, your body is designed to do a multitude of amazing tasks.

1. Your skeleton is made of more than 200 bones

Inside your body are 206 bones. Each bone plays a very important role in making all the 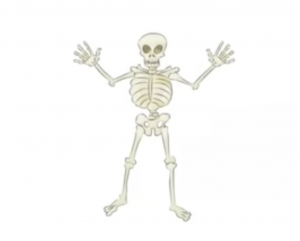 mechanics of your body function properly. If a bone is broken, all the bones around it can’t perform their duty properly.

2. The body has two types of bone

You may think of bone as a hard, dense material, but only one type of bone is like this.

The second type, trabecular bone, is soft and spongy. It’s often found inside large bones and, in your pelvis, ribs, and skull. Though it’s less dense than cortical bone, it’s still quite hard and protective.

3. Bones are filled with a spongy tissue

Bone marrow is a spongy substance that’s found inside large bones like your hips, pelvis, and femur. Bone marrow houses stem cells. Stem cells are responsible for producing many of your body’s most important cells, including blood, brain, heart, and bone cells.

Adults will end up with only 206 bones, but babies are born with almost 100 more. It’s not that bones disappear as we grow older. Instead, these tiny bones fuse together to form the larger bones of the skeletal system.

5. The smallest bone in the body is in your ear

The stapes, a bone in your inner ear, is the smallest of all your bones. This bone is also sometimes called the stirrup because of its Y shape. Together with the anvil and hammer bones, the stapes helps translate sounds you hear into waves your brain can understand.

6. The longest bone in the body is in your leg

The femur, which runs from your hip to your knee, is the longest and largest bone in your body. It’s also the strongest. Just think of all the weight that bone handles in a day. No wonder it’s so strong!

7. Bones are designed to take a beating

Yes, bones can break. But they’re designed to stand up to daily wear and tear. For example, some bones must be able to absorb two to three times your body weight in force. They must also be resilient. You take 1 to 3 million steps per year, so bones are built to take the constant use.

8. More than half your bones are in your hands and feet

9. One bone isn’t connected to any other bones

The hyoid bone, which is in your throat, is the only bone that doesn’t connect to a joint. The hyoid is responsible for holding your tongue in place.

A 13th rib is rare — only 1 percent of people are born with it. In most people, this extra rib, called a cervical rib, can cause medical issues like neck pain. For that reason, people born with this extra rib often have it removed.

11. The biggest joint in your body is your knee

At the knee joint, three bones connect: your femur, tibia, and patella. Those three large bones require an equally large joint to connect them. That’s why your knee is the largest joint in your body.

12. A skeletal system isn’t that common in the world

Humans are part of a group of creatures called vertebrates. That means our bones are covered by a system of tissue and skin. Only 10 percent of the world’s animals (humans included) are vertebrates.

The other 90 percent are invertebrates. Their bones are on the outside of their body.

The enamel on your teeth, which are considered part of your skeletal system, is actually stronger than bones. Enamel protects the delicate nerves and tissue inside your teeth. Inch for inch, your teeth can take more wear and tear than any of your other bones.

When you fracture a bone, your body will go to work producing new bone cells and helping heal the break. A cast or brace just ensures the bone heals straight so you don’t have more problems in the future.

15. You can eat your way to stronger bones

The skeletal system can support you for a lifetime of movement. Taking proper care of it ensures you can move longer, experience more, and have greater health. Knowing how to properly care for your bones can go a long way to a healthy, fulfilling life.

What can bones do?

Bones serve many vital functions in your body, including:

Bone provides a rigid framework as well as support for other parts of your body.

For example, the larger bones of the legs offer support to your upper body while you’re standing up. Without our bones, we’d have no defined shape.

Bones also play an important role in the movement of your body, transmitting the force of muscle contractions.

Your muscles attach to your bones via tendons. When your muscles contract, your bones act as a lever while your joints form a pivot point.

The interaction of bones and muscles contributes to the wide range of movements your body is capable of making.

Your bones also protect many of your internal organs. Good examples of this include the way your rib cage surrounds organs such as your heart and lungs or how the bones of your skull surround your brain.

The many cells of your blood — red blood cells, white blood cells, and platelets — are formed within your bones. This process is called hematopoiesis, and it occurs in a part of your bone marrow called the red marrow.

Important minerals, such as calcium and phosphorus, are stored within your bones. When your body needs more of these resources, they can be released back into your bloodstream for use.

In addition to red marrow, bones also contain another type of marrow called yellow marrow. This is where some fat tissue is stored. The fats in this tissue can be broken down and used for energy if required.

Most bones are made of several layers of tissue:

The bones of your body are divided into five different types based on their shape and function.

As their name implies, long bones are longer than they are wide. Some examples include:

Short bones have very equal proportions and are roughly shaped like a cube. Examples can be found in the bones of your wrists and ankles.

Short bones provide stability to the wrist and ankle joints and help facilitate some movements.

Flat bones aren’t actually flat, but thin and slightly curved. Examples of flat bones include your:

Flat bones can also serve as points of attachment for your muscles. Your shoulder bone is a good example of this.

The irregular bones of your body have varied shapes that are often complex. Examples include:

Sesamoid bones are small and round in shape. They’re found throughout the body, mostly in the hands, feet, and knees.

Interestingly, their placement can vary from person to person. The patella (kneecap) is an example of a prominent sesamoid bone in the body.

Sesamoids are bones that form within a tendon and bones surrounded by tendons, which connect muscle to bone. They help to protect the tendons from wear and tear and to relieve pressure when a joint is used.

They give a mechanical advantage to the muscles and tendons in which they are located.

Let’s have some fun bone facts

The framework of bones and joints in the human body is both complex and fascinating — just like you. Bones fit together like a massive puzzle and rely on a variety of muscles to move at joints from the neck and jaw down to the toes.

The part of the body that contains the most bones is the hand. It’s made up of a whopping 27 individual bones.

Most red and white blood cells in the body are created in bone marrow.

The femur, located in the thigh, is the longest bone in the body.

The stapes, a stirrup-shaped bone located deep in the ear, is the body’s smallest bone.

Bones store about 99 percent of the calcium in your body and are composed of about 25 percent water.

Your skeleton completely replaces itself every 10 years or so through remodeling. It’s kind of like remodeling your kitchen, except the new one looks like the old one.

There are two types of bone material: cortical, the hard kind that you think of when you picture a skeleton, and trabecular, which is softer and spongier and often found inside large bones.

Some bones are designed to withstand two to three times your body weight in force.

Vocabulary Words
Have your student search and write out the definition for each vocabulary word below. 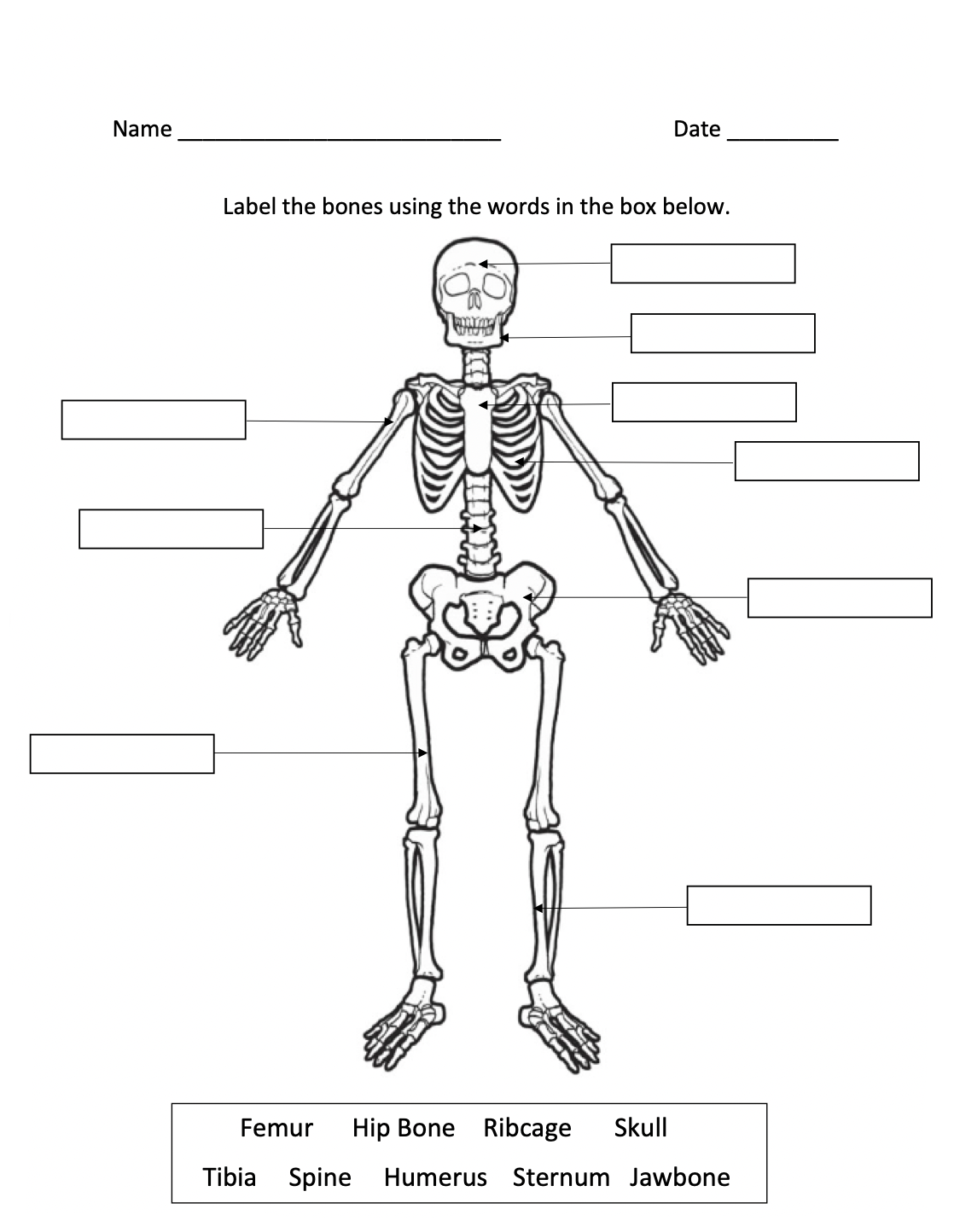 Cartilage
firm, whitish, flexible connective tissue found in various forms in the larynx and respiratory tract, in structures such as the external ear, and in the articulating surfaces of joints. It is more widespread in the infant skeleton, being replaced by bone during growth.
o a particular structure made of cartilage.
plural noun: cartilages
“his knees failed and the cartilages were removed”

Vertebrae
plural noun: vertebrae
each of the series of small bones forming the backbone, having several projections for articulation and muscle attachment, and a hole through which the spinal cord passes.
“the needle is inserted between two of the vertebrae”

Ligaments
plural noun: ligaments
a short band of tough, flexible fibrous connective tissue which connects two bones or cartilages or holds together a joint.
o a membranous fold that supports an organ and keeps it in position.
o ARCHAIC
a thing which unites people or things, a bond.

Periosteum
noun: periosteum; plural noun: periostea
a dense layer of vascular connective tissue enveloping the bones except at the surfaces of the joints.

Cancellous
adjective: cancellous
denoting bone tissue with a mesh like structure containing many pores, typical of the interior of mature bones.

Sesamoids
plural noun: sesamoids
a small independent bone or bony nodule developed in a tendon where it passes over an angular structure, typically in the hands and feet. The kneecap is a particularly large sesamoid bone.